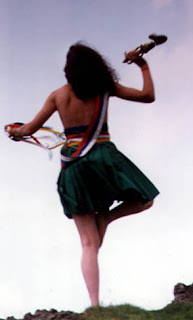 In this video from February 2010, Ngakma Nor’dzin & Ngakpa ’ö-Dzin explain what it means to take ordination within the Aro gTér Lineage.

Ngakma Nor’dzin: To be ordained is to make a commitment to Lamas, Lineage and Sangha that is deeper than apprenticeship. One is not expressing confidence, one is expressing certainty. One is expressing that you believe that not only will you be part of this Lineage for this life, but that it is going to be unbreakable – that potentially you’re going to be part of this lineage and have a relationship with these Lamas for all future lives as well.

Ngakpa ’ö-Dzin: People can become apprentices and then stop being apprentices – and that’s built into the structure of the apprentice programme, because you don’t know how interested you are in something until you start. It’s impossible to say that once you’re an apprentice you’re always an apprentice, because you actually don’t know what you’re getting into. So to be able to become an apprentice within the Sangha there’s the idea of a probationary period where you’re still learning about what it means to be an apprentice. People can decide, having seen what apprenticeship looks like, that they no longer want to practise in that way. Or they can decide from there that they feel really settled within this Sangha and settled within this is kind of practice and decide that apprenticeship is something that they want to be part of in the long term. This may or may not lead towards ordination.

Ngakma Nor’dzin has explained ordination. It’s not expected, and even if it is asked for, it’s not necessarily the case that it’s going to happen – because both the Lama and the potential disciple have to be ready for that relationship. So this can take a long time of having a person who is pre-ordained, or working towards ordination, to come to the point of understanding what that’s going to mean. Pre-ordination is almost like a probationary period leading up to ordination where you discover whether that’s what you really want.

Ngakma Nor’dzin: So it’s a bit like getting engaged. Pre-ordination is like being engaged. You said you’re going to get married and you then behave as if you are married, to try that out and see what it’s like. The ordination is the actual marriage.