In this video from February 2010, Ngakpa 'ö-Dzin discusses the question of whether Buddhism is a philosophy or religion.
Transcript
Ngakpa 'ö-Dzin: You can put Buddhism into all sorts of categories and how you’d answer a question as to whether it’s a philosophy or a religion might depend on the purpose behind the question. I think if you are filing books in a library, then you probably want to put them all on the religion shelf. Buddhism has a philosophy, or has several philosophies, and has many methods.

People who define religion in terms of a belief in a god wouldn’t file Buddhism with religion, but in terms of its outward aspects and the fact that many schools of Buddhism are very colourful, very noisy and perhaps does things that are similar to the style of other religious observances, then to be honest you’d say: ‘This is a religion.’ There was a fashion maybe twenty years or so ago of saying: ‘It’s not a religion, it’s a way of life’, but I’m not sure what a way of life is, if it’s not a religion.

It could be seen as a peculiar religion, because there are many things about it that don’t appear to be the same as other religions, but if we had to pick one way of describing it, it would probably be most honest to say that (it is a religion), because when people come into the environment of practice it actually looks a lot like a religion.

It may not have—and it need not have—dogmas or beliefs, because it tends to work more in terms of discovery. So a practice will be indicated and you discover what you discover through that. When you don’t have to believe anything before you start, you just need enough interest usually to get yourself sitting on a cushion and that’s where it begins.

So from that point of view it’s not like a religion in the sense of having to believe a piece of material before you can start. That’s not needed. From there, once we begin to practice, if we find that practice is helpful and useful, we can go further. We can ask questions and we can find out more about it. Then there is an almost infinite wealth of possible things that we could study to find out more about the underpinnings of Buddhism in terms of how it functions. But in practice, we tend to learn about what’s going to be helpful to us or what we are enthused about, rather than learning factual material just for the sake of it.

Posted by Aro Ling Cardiff at 13:10 No comments:

To ride phenomena - Battlecry of Freedom 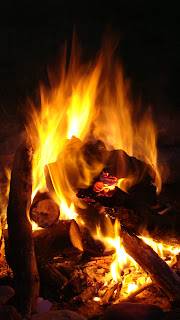 Phenomena manifest in particular forms, shapes, and colours; at particular times; in particular places; and are experienced by particular minds. Then phenomena change, move, or cease, and perceivers’ experience changes, moves or ceases. This is the dreamlike nature of phenomena.
To ride phenomena as they arise—like dreams, changing, moving, and ceasing—is to awaken. To attempt to fix phenomena in particular forms beyond the moment of their arising, is to lose the experience of riding, and therefore the potential of awakening.

Posted by Aro Ling Cardiff at 12:37 No comments:

From Sutra to Tantra - Illusory Advice 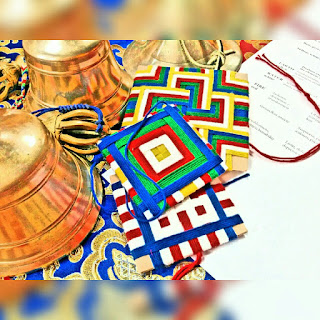 Apprentice: One of the things I’ve not quite taken on board fully yet is that Tantra ‘allows’ and works with personality. I am still influenced by a sutric view of things, even when I’m trying not to be.

Teachers: Tantra can seem rather decadent or dangerous from the perspective of Sutra. Sutra moves towards emptiness and so personality is irrelevant. Everything is calmed down. Tantra however begins with the experience of emptiness and conjures with form. Personality and the richness of life is embraced as the material with which the nonduality of emptiness and form can be discovered.

Posted by Aro Ling Cardiff at 12:21 No comments:

In this video from February 2010 Ngakma Nor’dzin and Ngakpa ’ö-Dzin discuss the value of romantic relationship as an aspect of the path of practice.
Transcript
Ngakpa ’ö-Dzin: Romance and relationships are an important part of the teachings within the Aro Tradition, and how romance can be part of a path of practice. To have people who teach as couples is also a reflection of this. I came originally from a background where all my teachers were monastic, and to move into a Sangha where you have a teaching couple was quite a revelation: the idea that your teachers actually have a romantic relationship and reflect to you how a romantic relationship can exist without neurotic functioning (which is often thought to be part of it), and this in itself an important teaching. So a teaching couple teach not only through what they say, but with how they are with one another as well.
Ngakma Nor’dzin: So our students often will come and stay with us—not just come on retreats—and they see that we we’re a happy couple and our practice is informed through the fact that that we practice as a couple and are in romantic relationship – that we actually like being together and enjoy each other's company and love one another. So this is all very helpful for our students.
Posted by Aro Ling Cardiff at 13:10 No comments:

When life is stormy, first learn to relax 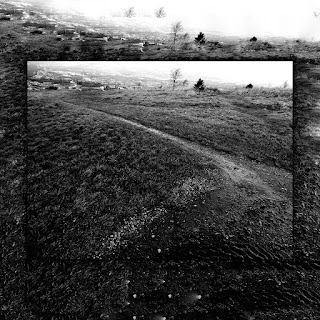 I have found that people expect meditation to be a solution to their problems. This was another common factor that arose amongst many of those attending my classes: a need for relief from exceptional personal circumstances such as illness or bereavement. People attended the class in the hope of finding help with a particular personal problem.

A period of life with an unusual degree of stress or difficulty however, may not be the best time to try to begin meditation practice and in such circumstances it will certainly be better to begin with relaxation techniques. It is in fact preferable to have established a degree of stability in one’s life and relief from immediate pain—mental, emotional or physical—before beginning meditation.

Email ThisBlogThis!Share to TwitterShare to FacebookShare to Pinterest
Labels: Relaxing into Meditation 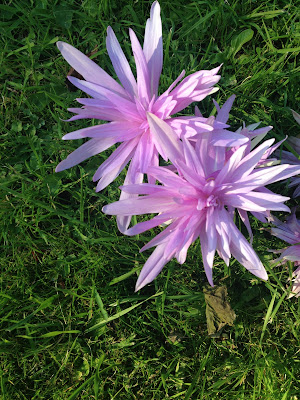 As we become familiar with viewing impermanence [in this way] and embracing the present moment, our mind-moment experiences can become less clumpy.  We can start to develop awareness in every actual mind-moment.

At first we experience presence in a clumsy, artificial way like the flickering frames of an old black and white movie.  We continually attempt to apply awareness to our experience and arise with presence, so that we can act from the liberated energy of spontaneity rather than the stilted constriction of expectation and anticipation.

In this video from February 2010 Ngakma Nor’dzin & Ngakpa ’ö-Dzin talk about the benefits of teaching as a couple – both for themselves, and for students.
Transcript
Ngakma Nor’dzin: The Aro gTer Lineage is unusual—possibly unique—in that we have teaching couples rather than just individual teachers. I think this offers a wonderful opportunity for people who become students to have a teaching couple. You have the same sex teacher as your role model, and you have the opposite gender teacher – who is your teacher in that they can reflect to you in a different way to the same gender teacher.

Ngakpa ’ö-Dzin: We have different qualities and different ways of approaching a question, so if questions arise within the group of students I’ll often listen with fascination to the answers that Ngakma Nor’dzin gives because she comes at a question from a different angle to me.

Ngakpa ’ö-Dzin: So as much as anything, I’ll be sitting here learning, being able to understand things in a different way. We are able to play—in a sense—with our relationship in terms of how we approach teaching. So we enjoy each other’s company, and the teachings that we can give are complementary. Also it can give one person the chance to rest and consider a situation in more depth, while the other person is answering perhaps the immediate question. So it enables us to work together in that way as well.

Ngakma Nor’dzin: It’s also very useful to me being a little bit deaf! So when i mis-hear a question that somebody asks me, and answer the wrong question, then Ngakpa-la can very gently say at the end ‘well that was a lovely answer, my dear, but that was not quite what was asked’, and then we can start again. 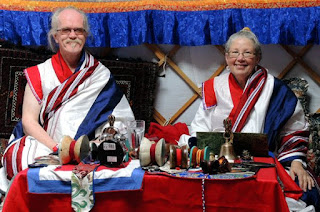 Posted by Aro Ling Cardiff at 13:10 No comments: