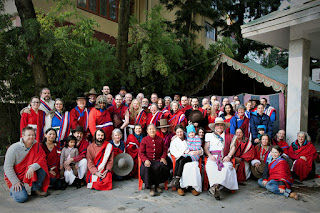 In this video from February 2010, Ngakma Nor’dzin and Ngakpa ’ö-Dzin explain the levels of commitment that are possible within the Aro Lineage.

We’re very happy for people to simply come to open retreats and to have a connection with us and with the lineage in that way. We’re also very happy for people who decide to become an apprentice, if they never want to be ordained, if they never want to enter into taking that level of commitment – that is absolutely fine. So there is no sense of, once you start having a relationship with us it’s assumed that you’re on some sort of roller-coaster that will take you through to the ultimate experience of becoming an ordained disciple.

Ngakpa ’ö-Dzin: I think it’s very important to know that it’s perfectly fine for someone’s relationship with Buddhism to be similar to that of going to church on Sunday. It doesn’t have to be any more than that. If that is useful and meaningful to somebody in their lives then that is a good place to practise. We’ve seen people who become interested in Buddhism who thought ‘If I can’t commit absolutely everything there’s no point in me even starting’. Then they leave, whereas perhaps a little bit of involvement might be worthwhile. So it doesn’t have to be all or nothing. There are various levels of engagement, all of which we’re entirely happy with.

If people just want to come to the group and sit with us, that would be fine. If people want to become an apprentice, that’s also fine. So there isn’t a sense in which people are pushed on in their practice unless they come to us and ask to be pushed. The relationship between us in the rôle of teachers, and our students who are apprentices, is a mutual relationship where people will ask us questions. People will decide for themselves perhaps that they want a bit more prodding, prompting and direction, but that doesn’t come from us. So if people ask us, “What do I do next, which practice should I be doing?” then we will give them an indication of that.

Ngakma Nor’dzin: The process of becoming ordained is quite a long term event in itself. It could take up to five years from first saying ‘I would like to become ordained’, to actually entering the ceremony and making that formal commitment. So that gives the student and ourselves the time to really look at whether this is going to work with them, whether they really understand it, whether it is going to be right for them in their lives, whether we can develop that relationship with them and them with us.