Aro Ling Buddhist Centre has been nominated in the not-for-profit category of the Regional Awards in Cardiff. 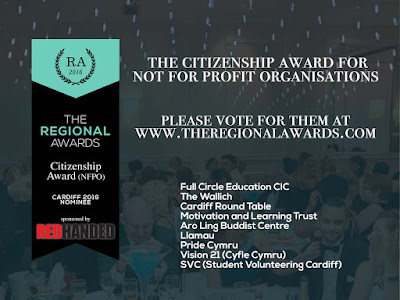 Please vote for us here before the end of the year.
Voting closes on December 31st 2015.


You've been nominated!
The Regional Awards has now launched in Cardiff.  Bringing a transparent and completely independent judging format that recognises the achievements, expertise and hard work of the most remarkable businesses and individuals in the region.  We are pleased to inform you that your entry or nomination has been accepted.

The Regional awards are pleased to announce both RedHanded Magazine and Buzz Magazine as media partners for The Regional Awards event in Cardiff.

With an estimated 250 entries the first event in Cardiff looks set to be one amazing event, lasting in total a staggering 6 months for the entry, voting, judging process and of course the awards evening.

Paul Mulligan of RedHanded Magazine said "RedHanded is proud to be associated with The Regional Awards because they genuinely reflect and recognise what’s great about the inspirational people and businesses of Cardiff. Key to this is the independence and transparency of the judging process – it’s reassuring to know that the winners will be judged solely on merit. May the best business win!"

Matt Lissack from Capital FM's South Wales Breakfast Show is set to be hosting the evening which will be held at the prestigious Mercure Holland House Hotel on Thursday 7th April 2016.
Posted by Aro Ling Cardiff at 16:02

Email ThisBlogThis!Share to TwitterShare to FacebookShare to Pinterest
Labels: news